Event information may be out of date due to COVID-19. Please confirm details with event organizers.

Berlin celebrates the International Beer Festival also called Berliner Bierfestival, every year, in the weekend days of the first week of August (Friday, Saturday and Sunday). The three days festival started in 1997 and since it is known as a huge beer fiesta with the participation of more than 750,000 people.

Since 1997, the Berlin International Beer Festival has thrilled more than three quarters of a million visitors from all over the world. It is the most important event of its kind and has established itself as the capital city's event.

Every year for the International Beer Day, around 350 breweries from 90 countries with well over 2400 different beer specialties present themselves on three event days of the first weekend in August in the heart of Berlin. 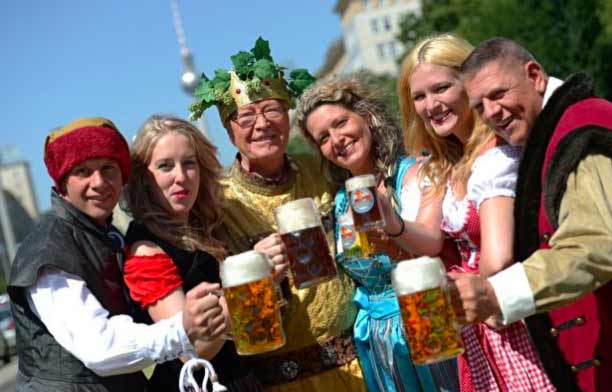 Divided into different regions, you can experience the cultural and culinary specialties over a length of 2.2 km along Karl-Marx-Allee in the trendy Berlin-Friedrichshain district. Since 2011, the Berlin International Beer Festival with its unique “longest beer garden in the world” has been the record holder of the GUINNESS WORLD RECORDS.

The International Beer Festival (Biermeile) celebrates the national drink of Germany with a three day folk festival. Along a section of Karl-Marx-Allee in the Friedrichshain district between underground stations Strausberger Platz and Frankfurter Tor, about 350 breweries from almost 90 countries serve approximately 2,400 different beer specialities.

The beer avenue begins in Frankfurter Tor, continues in Strausberger Platz and reaches its climax along Karl-Marx-Allee. This is an enormous continuity of beer and food fiesta along 2.2 km.

All the festival’s events are accompanied by musical shows performed on 18 stages. The entry to the festival is free.

The festival ground is divided into areas according to the geographical origins of the beers. Among them are several German states such as Bavaria, Saxony, Westphalia and Thuringia but also places much further away like Vietnam and Japan. Various stages along the street offer live music, shows and entertainment programmes. Hungry visitors will find a selection of German and international culinary delights on the beer mile.

Due to the numerous visitors during the festival days and the high demand for tickets and accommodations it is recommended to check hotel rates and book rooms well in advance.

6-8 August: These dates are predicted, not officially announced.

Event information may be out of date due to COVID-19. Please confirm details and more information with event organizers.